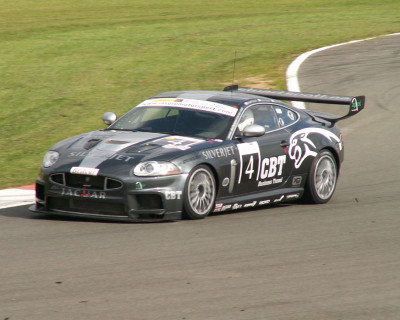 The Jaguar XKR GT3 car was born out of an association between Richard Lloyd’s Apex racing team and Jaguar designed to put a car on the grid of the then-new FIA GT3 Championship. Alas its progress came to a halt with Lloyd’s untimely death in a plane crash.

It made its track debut in 2007 at the Silverstone 24 Hours and went on to win GT3 in the Dubai rounds of the FIA GT European Championship. The Jaguar was also third overall in the Britcar Spa 4-Hours race.

The XKR GT3 retained the supercharged 4.2-litre quad-cam V8 engine of the road-going Jaguar, with some alterations to aid durability and to boost power output to around 500bhp. Cooling was provided by an air-to-water cooler mounted low down in the nose of the car to cool the water from the standard supercharger charge coolers, with an oil-to-air cooler mounted behind that for the dry-sump oil system. The main engine cooling duties were handled by an NRP aluminium radiator mounted in the standard factory position.

Power was transmitted to the rear wheels via a carbon propshaft to a six-speed Hewland sequential transaxle in the rear. The suspension was altered by Apex to utilise unequal-length double wishbones on all four corners and specially fabricated anti-roll bars, controlled by Koni two-way adjustable coil-over shock absorbers.
Braking at the front was controlled by Alcon six-pot calipers wrapped around 375mm discs, and at the rear Alcon four-pot calipers with 330mm discs. Apex used an AP Racing floor-mounted, adjustable brake bias pedal assembly, with the bias control mounted on the central column below the electrical switches.

The car used the same lightweight aluminium chassis as the road car, with the addition of a steel roll cage is to protect the driver.