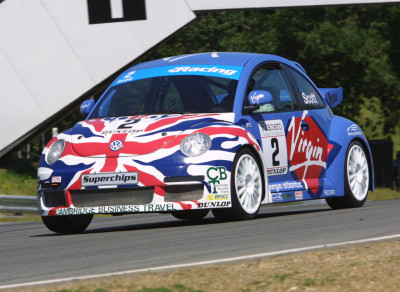 The Racing Beetle RSI made its competition debut in 1999 in the Volkswagen Racing-organised New Beetle Cup, and examples of the 2.8-litre V6-engined “superbug” found their way into the UK-based Volkswagen Racing Cup two years later. CBT Motorsport’s Stuart Scott was the first UK driver to take delivery of one.

Designed and developed at Volkswagen Racing’s Hanover headquarters, the Racing Beetle RSI provided much of the inspiration for the road-going Beetle RSI, and many body panels were shared.

The big mechanical difference between the two, of course, was that the track version was front-wheel drive, while the road car was 4wd. The two cars could not be more different inside, either: the Racing RSI is a pared-to-the-bone track machine equipped with a hefty welded-in roll-over cage, a single OMP racing seat with six-point harness and a plumbed-in fire extinguisher system.

With 220bhp to play, a six-speed gearbox and race-developed anti-lock brakes, not to mention racing rubber, the RSI was a potent track weapon, as demonstrated by Stuart during the 2011 Volkswagen Racing Cup season, when he scored many top-10 finishes.