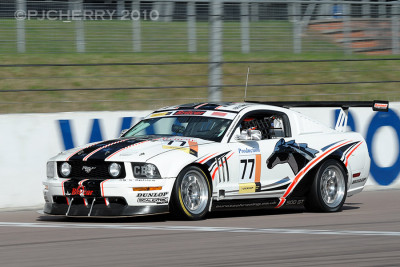 Built by Multimatic of Canada in 2008, the Mustang became a popular sight and a regular prizewinner with CBT Motorsport during the 2009 season. It won outright the Silverstone Britcar 1000km race in ’09 and went on to take third place overall in the Britcar Production Championship that season.

Maintained by Eurotech Racing, the Mustang features a Mountune 5400cc engine producing 500bhp thanks to a Motec management system, and is equipped with a Drenth sequential gearbox, Moton dampers, a bespoke differential, Ford Racing magnesium race wheels and long-range 90litre fuel tank. It boasts a maximum speed of 165mph