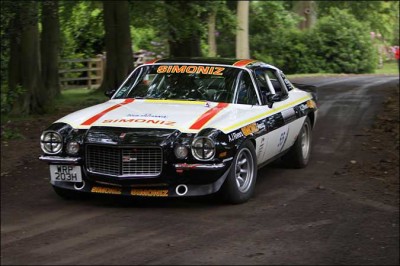 The CBT Motorsport Chevrolet Camaro is a replica of the machine raced by Richard Lloyd in the British Saloon Car Championship in the 1970s, the same car which most famously won the 1973 Tour of Britain, piloted by James Hunt and Robert Fearnall.

It was built by Richard Lloyd himself with the idea of contesting the Tour Britannia. Says Stuart Scott: “Richard decided to build a replica of his original Camaro to the spec in which it raced in the 1973 Tour of Britain. A new event called Tour Britannia had just started up in 2005, very much in the spirit of the original Tour of Britain, by Alec Poole, one of the original Tour competitors in the works Datsun team. Richard wanted to take part, so he had his company, Apex Motorsports, build this car to the original 1973 specifications.”

Lloyd used the Camaro on the Tour in 2005, ’06 and ’07 with co-driver Alan Rivers, and the following year, following Richard’s death, Alan and his son Alex tackled the Tour with it. Thereafter Stuart Scott and Steve Wood have been at the wheel for the Tour Britannia; their best year was 2012, when they won their class and brought the Chevrolet home third overall.