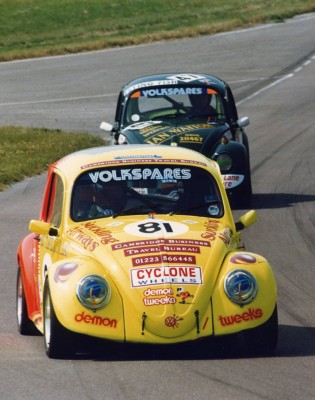 Where it all began for Stuart Scott and CBT Motorsport – the original Beetle with which the team contested the famous Big Boys Toys Beetle Cup in 1995. The car won many races in the hands of Mark Sumpter and was raced to championship 10th by Stuart.

The Beetle cup race series was for ‘swing axle’ Type 1 VWs built after 1957. All cars had to have a current MoT and incorporate the performance kit supplied by Big Boys Toys, which included a sealed 1641cc 90bhp engine, carburettor kit, exhaust, tyres, dampers and roll cage.

Cars had to maintain the standard silhouette and all bodywork had to remain steel. The suspension could be lowered at the front by fitting swayaway adjusters and the rear suspension could be lowered by adjustment of the spring plates to set ride height. Anti roll bars were free, as were torsion bar bushes. Transmission had to be a standard, unmodified gearbox, though you could choose from a gearbox from various years and models. Limited-slip diffs were not permitted.